Chair of Fluid Mechanics and Institute of Aerodynamics

History of the Institute of Aerodynamics

The first wind tunnel in Aachen

The "Rheinisch - Westfälische Technische Hochschule Aachen" was founded in 1870. At the beginning Prof. A. Ritter occupied the chair of mechanics. He was succeeded by Prof. A. Sommerfeld and later by Prof. H. Reissner. Together with H. Junkers, who was to become one of Germanys most famous airplane manufacturers, he started flow experiments at Aachen in 1909.

Major theoretical research was conducted in the field of flight stability and aircraft manoeuvrability. In 1909 Reissner made experiments with a biplane that glided more than 100m. A development of his was the famous "Reissner Duck" with a canard configuration. It took off in 1912 and was the first all-metal construction airplane. Although Reissner left Aachen in 1913, he can be regarded the founder of the Aerodynamisches Institut in Aachen, the history of which dates back to 1912.

In 1913 Th. von Kármán took over the chair of mechanics and aerodynamics. He had studied in Budapest and joined Prandtl in Göttingen in 1906 to write his PhD thesis on the buckling phenomenon in structure mechanics. He is not only to thank for the scientific development of the Institute but also for establishing an intensive interaction between research and application at Aachen. 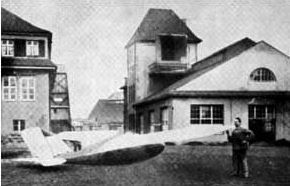 The Institute of Aerodynamics at around 1922

From 1926 on von Kármán commuted between Aachen and the California Institute of Technology in Pasadena, where he was the director of the Graduate Aeronautical Laboratories. After a long leave of absence he finally left Aachen and settled in Pasadena in 1934. Th. von Kármán had more than just an outstanding impact on the research in fluid mechanics and aerodynamics in Aachen. After the Second World War von Kármán devoted himself to the reintegration of the German aerodynamics research within the international community. In addition, he was the founder of the NATO Advisory Group for Aeronautical Research and Development (AGARD) and in 1963 had been awarded the United States first National Medal of Science by President Kennedy. A few weeks after the ceremony on May 7, 1963 von Kármán passed away five days before his 82nd birthday in Aachen. Several days later services were held in his home in Pasadena.

After Carl Wieselsberger had studied and done his doctorate in engineering in Munich he went to Göttingen where he received a doctor degree in philosophy. Until 1930 he worked at the Imperial University in Tokyo. In 1931 he was called to Aachen to fill the chair of mechanics. Later he also succeeded von Kármán as the director of the Aerodynamisches Institut. His research was closely related with his flight experience since he was a passionate pilot. He developed measurement techniques and instruments, and began to construct an intermittent operating supersonic wind tunnel. Prof. Wieselsberger deceased in 1941 at the age of 53 after a painful disease.

Between 1941 and 1944 the Aerodynamisches Institut strongly suffered from air raids and was finally relocated to Sonthofen in Bavaria. In 1947, after the collapse of the Third Reich, the Institute returned to Aachen. Immediately after the Second World War aerodynamics research was strictly forbidden in Germany. However, over the years the restrictions were abolished thanks to scientists like von Kármán.

In 1942 F. Seewald was called to Aachen and appointed director of the Institute. He had studied and received his doctorate in Aachen and later on worked at the Deutsche Versuchsanstalt für Luftfahrt (DVL) in Berlin. Today, DVL is called DLR, Deutsches Zentrum für Luft- und Raumfahrt. As a result of his former position Prof. Seewald still had duties in Berlin, which is the reason why Dr. Naumann gave most of the lectures in the early 50s. After the war the research at the Institute focused on fundamental problems of fluid mechanics. Prof. Seewald recognized the need for a stronger consolidation of aerodynamics research than being possible at a university. Therefore he established a new DVL branch in Aachen. Although he became an emeritus professor in 1963 he lectured till 1973. Prof. Seewald passed away in Aachen in 1974 at the age of 79.

In the sixties A. Naumann filled the chair of fluid mechanics and took over the management of the Aerodynamisches Institut. He had studied in Leipzig and came to Aachen in 1937 as chief scientist under Prof. Wieselsberger. After the Second World War he worked in France before he returned to Aachen in 1951. His research was mainly devoted to gas dynamics. His courses comprised hypersonic flows, thermal and magneto gas dynamics, low density flows, etc. Like von Kármán he was a member of the NATO Advisory Group for Aeronautical Research and Development (AGARD). In 1983 Prof. Naumann deceased in Aachen at the age of 77.

E. Krause completed his studies at the Rheinisch-Westfälische Technische Hochschule (RWTH) in Aachen in 1961. Supported by a NATO grant he studied at the Polytechnic Institute in Brooklyn to receive a Master of Science degree (MSC) in 1962. He finished his PhD-studies at the University of New York in 1966. He was awarded the Founders Day Award of the University of New York and returned to Germany in 1967 to work at the Deutsche Forschungs- und Versuchsanstalt für Luft und Raumfahrt (DFVLR) in Cologne.

In 1973 Prof. Krause was appointed director of the Aerodynamisches Institut and occupied the chair of fluid mechanics. His neverending commitment for a strong interaction between experimental and numerical analysis was the basis for the high research level at the Institute. In 1993 Prof. Krause and Profs. K. Kuwahara and R. Peyret received the Max Planck Research Prize. In July 1998 Prof. Krause became Emeritus.

In August 1998 W. Schröder took over the chair of fluid mechanics and became head of the Aerodynamisches Institut. He completed his studies in Aachen in 1983 and later received his doctorate degree at the Aerodynamisches Institut. In 1987 he received a scholarship from the Deutsche Forschungsgemeinschaft (DFG) to study at the California Institute of Technology. In 1988 he received the Hermann Reissner Prize at the University of Stuttgart together with his colleagues Drs. D. Hänel and R. Schwane.

1989 he returned from California to Germany to take on a position in the space division at MBB (Messerschmitt-Bölkow-Blohm GmbH) Munich, later on renamed Deutsche Aerospace AG, where he was involved in several European space flight projects. In 1995 Prof. Schröder became Professor for Mathematics and Statistics at the University of Applied Sciences in Braunschweig/Wolfenbüttel until he received the call from the Rheinisch-Westfälische Technische Hochschule in Aachen in 1998.